Unless you take effortless classes at college, finals are going to be arduous compared to high school finals. I know people who didn’t even take finals in high school. Pssh, they had no idea what they are in for.

Some of your teachers aren’t total douche bags. You might even actually like them. They will be the kind ones who don’t give cumulative finals, provide study guides, or don’t give a final. Appreciate them. Never let them go.

Then, there are the professors that hate you. These professors don’t care if they’ve been riding your ass all semester. They’re in this game of higher education to make you hate your life. They do pretty well, too.

1. The final is comprehensive.

This is the ALL TIME worst thing a professor can do to you. I know, because I’m a biology major and every one of my science finals have been cumulative. Cumulative finals in biology classes make you cherish general studies.

Every other cruel thing professors do for finals is only made worse by giving a cumulative final. There must be a pool during finals week to see how many professors can give a final that makes at least five people cry. Put my money on Dr. V. Cash out with school loans paid for.

2. They assign a paper and a final. 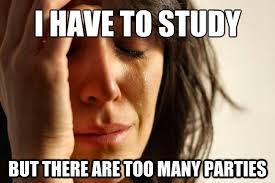 You might think this doesn’t sound so bad. You’ve had to study for tests and write papers at the same time throughout the school year so why should this be any different? It’s different, because it’s finals week.

Where are you going to find the time to study for the final—including all the rest of your finals—and write a 2000 word paper? Hello, 3 AM. Good bye, sleep. Plus, you are either freaking out about the tests you have or you’re drinking to forget that you’re freaking out about finals. Good luck, kid.

The length of your final depends on the overall douchiness of your teacher. Maybe they actually think you learned what was being taught during the second week of class. Oh, look, information from that video you were supposed to watch online.

This final will mentally exhaust you like no other test before. That’s a big no-no when you have another final roughly 30 minutes later. Don’t expect to have grace befall you; this is a VERY real possibility, at least in some majors.

4. They never handed back tests that you took during the semester.

These are the teachers who give similar tests year after year. They don’t want tests being traded for beer money so they come up with the brilliant idea to not let you see the tests you took. The finals they give are always the same as well: cumulative.

These professors really upset me, because a great way to study for finals is to look at old test questions. But, no. Since some professors are lazy SOBs, students have to become creative. As to how creative, I cannot say. Stay in school, kids.

Especially when a test is comprehensive, it’s greatly appreciated when students are provided study guides that inform upon the students the most important points from previously learned subjects. When a teacher provides nothing to go off of, it can leave a student grasping at straws for what they should be studying.

No, I don’t expect a study guide. I never do anymore. I never did in high school. But when I see students in business classes and history classes receiving study guides, I see an injustice that could be easily fixed.
GIVE US ALL STUDY GUIDES.

6. Your school doesn’t do Dead Week. 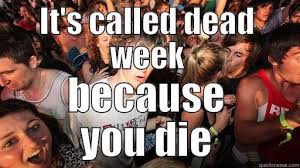 I go to a school where we don’t have Dead Week. We have Dead Monday. This doesn’t make up for anything though. My state school generally starts a week earlier than the other universities in the state, but we usually get out at the same time. All I can say is WTF.

I genuinely think all students at every institution of higher education would benefit from having a week to study for the insanely difficult finals that have a tendency to be given. Squeezing the studying of 5 subjects into a three day weekend is impossible, especially when everyone is going out for the last time of the semester that weekend.

For the people who suggest that we should’ve started studying long ago, shut up because all though this is perfectly reasonable advice, I have chosen not to take it. For the people who say start studying during that week anyway, I’ve had to take tests in the week before finals. And then we still have a final in that class!

I don’t mean to be a total Debby Downer during this post, but there are the hidden sides of college, like evil teachers. Different majors will deal with different styles of teaching. I unfortunately have chosen a major where very little teaching is done, but plenty of testing. One day it will be better?

Shout out to my comp teacher for not being one of these awful teachers that make me cry. She writes an awesome blog here if any of you are interested in some reading material! No, this isn’t some teacher’s pet thing; I just don’t want her to be offended by this post.

Any tips on getting through finals week in one piece? How do you RELAX during finals week? Is there any other way teachers have made finals and tests horrible? Tell me your experiences from finals week. Let me know what you think in the comments!

Again, I love college (oh, Asher Roth has an awesome song about this), but some things I could do without. I hear it builds character, or something?

Running 'Round the Block

One crazy 20-something's diary about running.

Thought Catalog is a digital youth culture magazine dedicated to your stories and ideas.

Life Out of the Box
taylutz

A bucket list blog: exploring happiness, growth, and the world.